ENERGY AND LIFE Energy is the force that makes it possible to do work. - PowerPoint PPT Presentation 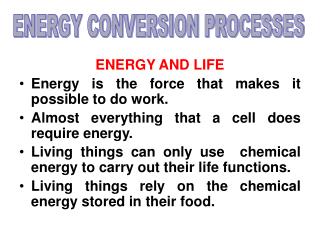 ENERGY AND LIFE Energy is the force that makes it possible to do work.

1 / 72
Download Presentation
ENERGY AND LIFE Energy is the force that makes it possible to do work.
127 Views

ENERGY AND LIFE Energy is the force that makes it possible to do work.

Sect. 7-4: Kinetic Energy; Work-Energy Principle - . energy : traditionally defined as the ability to do work. we now

TOPIC 5: Work, Energy &amp; Power - . work. definition of work: when a force causes a displacement of an object

Work and Energy - . work. work is said to be done when an applied force, f moves an object thru a distance, d. w = f x d

Work, Energy, Power - . what’s the difference?. force is the agent of change energy is a measure of change work is a

Work Done by a Constant Force - . work w  f || d = fd cos θ for a constant force!. consider an object moving in

Unit 5 Work, Power, and Energy - . chapters 10-11. work. what is work? physics definition: work is the transfer of energy

Work &amp; Energy - . work. work : it is used by physicists to measure something that is accomplished. so it results

Work and Energy - . i should understand and be able to apply the work-energy theorem, so i can: (1) calculate the change

Chapter 5 Work and Energy - . every † branch of science is concerned with energy. that being the case, you would think