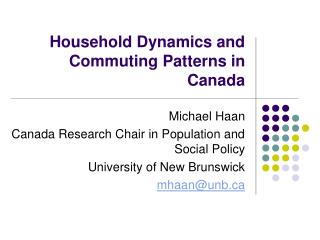 The Use of Household Surveys to Study the Dynamics of International Migration in the Arab Region - . samir farid regional

Recent Trends in the Evolution of Household Saving and Wealth Components in Canada - . presentation to the oecd working

Household Panel Data Reference - . household panel data analyses. the types of analyses that can be done with household