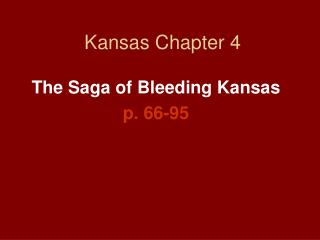 Helping Students Navigate the Path to College: What High Schools Can Do - . sponsored by the kansas city area p-20

Kansas History Review - . chapters 1-12. what forms kansas’s only natural border: a. the atlantic ocean b. the

The Market Potential of the Four Gaming Zones of Kansas - . presentation to kansas lottery gaming facility review board