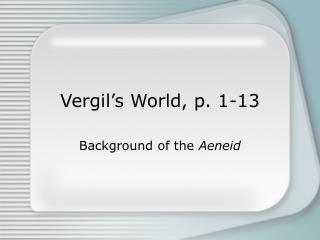 Vergil’s World, p. 1-13. Background of the Aeneid. Brief History. 753 BC: Founding of Rome Monarchy with 7 Kings 509 BC: Republic 27 BC: Empire *This transition from Republic to Empire is when the Aeneid was written, NOT when it takes place. #1) The First Triumvirate.