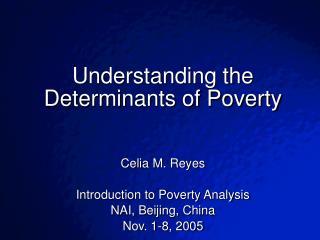 Understanding Poverty - . a critical look at who is poor and why william t. oswald, ph.d., springfield college, school

A Framework to Understanding Poverty - . 12 main keys. 1) poverty is relative 2) poverty occurs in all races and in all

From the Resources of Poverty to the Poverty of Resources - . the erosion of a survival model mercedes gonzalez de le

Understanding the educational implications related to poverty - How do you define poverty?. definition. poverty is the