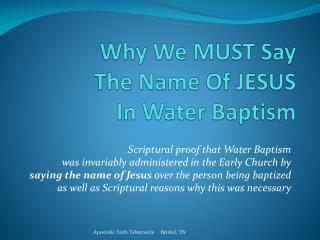 Why We MUST Say The Name Of JESUS In Water Baptism Why We MUST Say The Name Of JESUS In Water Baptism. Scriptural proof that Water Baptism was invariably administered in the Early Church by saying the name of Jesus over the person being baptized as well as Scriptural reasons why this was necessary. The Power of Saying THE NAME. Numbers 6

Why We MUST Say The Name Of JESUS In Water Baptism

BAPTISM - . st. edward catholic church rcia program. why you are

See, here is water, what doth hinder me From being baptized? Acts 8: 36 - . questions about baptism. scriptural baptism.

IS WATER BAPTISM ESSENTIAL TO SALVATION? - . there is much disagreement in the religious world regarding water baptism,

BAPTISM - . what it is . what it is not. sacrament of initiation cleanses you of original sin washes away all personal

The Sacrament of Baptism: - . history:. isaiah 40:3 a voice cries: “in the wilderness prepare the way of the lord, make

JESUS IS BAPTIZED - . st. john the baptist was humble &amp; holy he “ prepared the way ” for jesus ’ coming st

Arguments Against Baptism Answered - . acts 2:38 is easy. nkjv - then peter said to them, “repent, and let every one of

LESSON 11: BAPTISM - . purpose. to help each child better understand the importance of baptism. . our opening prayer will

&quot;Objections to BAPTISM&quot; Considered: - . baptism is a work &amp; we are not saved by works! the