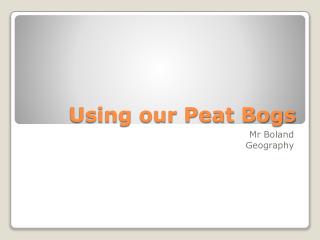 2017 Science Olympiad Official Ecology Presentation - This basically covers the same things in my videos, but it's more

BOREAL FORESTS - . marion b. and tesha k. (“marietta”). location. - south of the arctic tundra -latitude: around

The Bog Bodies - . yde girl. the bog bodies. over the past few centuries, remains of many hundreds of people - men,

WETLANDS From Bogs to Swamps - . pamela zevit rpbio, adamah consultants. what are wetlands?. “areas inundated or

Evolution and Life’s Diversity - . ch. 13 and 14. evolution: the process by which modern organisms have descended from

Neuro Vascular Observations - . neuro vascular assessment. is important in the assessment of circulation and nerve

Digging - . by seamus heaney mari sweeney. poem . the coarse boot nestled on the lug, the shaft against the inside knee

CLOSED FLOW GEOMORPHIC SYSTEMS - . landscapes with wetlands often have a closed, non-integrated stream system, or at

ENERGY EXAM REVIEW - . energy. defined as the ability to do work work is force acting across a distance power is the rate

Sustrate Spawners II: Killifish - . mops and peat. introduction. our last group of spawners use some unusual techiques to