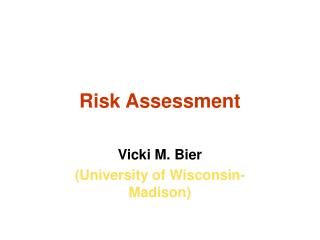 Risk Assessment . Vicki M. Bier (University of Wisconsin-Madison). Introduction. Risk assessment is a means to characterize and reduce uncertainty to support our ability to deal with catastrophe Modern risk assessment for engineered systems began with the Reactor Safety Study (1975):