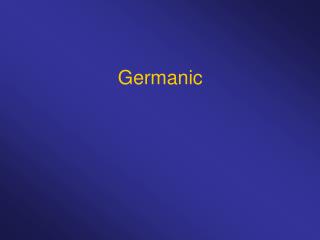 The Byzantine Empire - . one god, one empire, one religion. the eastern empire. as western europe succumbed to the

2 ND PERIOD!! - . everyone needs to get their rsg (reading study guide thick books) out and on their desks before class

Into the Dark Ages - . western rome destroyed by german and scandinavian invasions never reached the heights of culture

Germanic Kingdoms Unite Under Charlemagne - . ch. 13 sec. 1 pg. 317. the middle ages. there was a gradual decline of

Is It Plausible that Middle English is a Creole? - . cheryl stradling. the history of the english language. old english