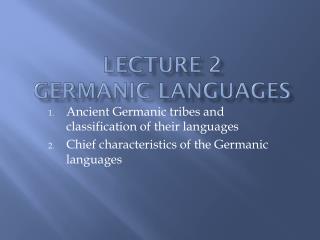 Germanic Immigration - Trades and crafts. many german immigrants entered the beer industry ... loyalty to the family,

GERMANIC KINGDOMS - . who were the germanic people and how did they form kingdoms?. the germanic tribes: origins. law and

Lecture Two: Formal Languages - . amjad ali. formal language. it is an abstraction of the general characteristics of