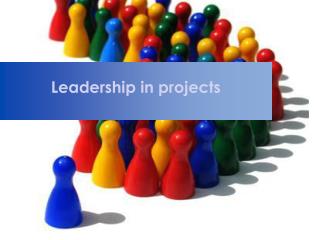 Leadership in projects. What is leadership ?. Vad är ledarskap?. Leading the way by going ahead Leadership may be considered as the process ( act ) of influencing the activities of an organized group in its efforts toward goal setting and goal achievement

LEADERSHIP - . questions from our readings or from last week’s class. group assignment using the assigned reading as

Projects - . projects grades hw. term papers/projects proposals are due on tuesday 10/23/12 . within a week we will give

LEADERSHIP - . articles: “effective leadership in a changing world” by glenn boseman , dba, clu, clf “are you a