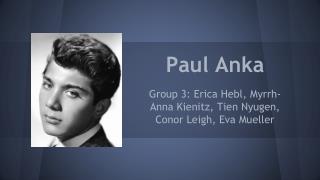 Goiter - . dr. gehan mohamed. thyroid enlargement. the term goiter (from the latin guttur = the throat) is used to THE 1950'S MUSIC, POP CULTURE AND THE NUCLEAR FAMILY - . the arrival of teenagers. teenagers. started to define

Learning about Taxes - . 2013 edition. our main character, paul , is a 17-year-old high school student who spends most of