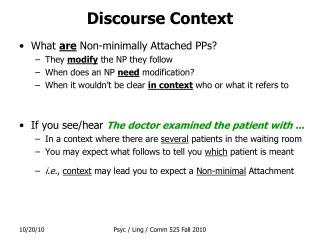 Discourse Context. What are Non-minimally Attached PPs? They modify the NP they follow When does an NP need modification? When it wouldn’t be clear in context who or what it refers to If you see/hear The doctor examined the patient with ...

Discourse analysis and Grammar - . principle of cohesion. the concept of cohesion in text is related to semantic ties or

Discourse and Pragmatics - . week 1. what ’ s it all about?. leaning to use the analysis of language to solve real-life

Chapter 18. Discourse - . from: chapter 18 of an introduction to natural language processing, computational linguistics,

What is ‘critical discourse analysis’?

Using Corpus Tools in Discourse Analysis - . discourse and pragmatics week 12 . what is a corpus? . an collection of a