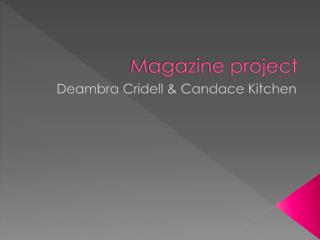 Magazine project . Deambra Cridell & Candace Kitchen . Top ten songs in 1969 . I think that this was made a hit because that when the temptation was on tour they could never see their wife's. . Sugar, Sugar The Archies 2. Aquarius/Let The Sunshine In 5th Dimension The 4 th Quarter will be based on three key objectives and activities - . the magazine project will be the last stage in

Exploring Spoof Ads from Adbusters Magazine - . food. why are you buying your food from a tobacco company?. what do you

Background Summary for the IT Project Failure Issue - . created by: venkat sattuluri. trade press. the biggest reason for

Trey Songz JET Magazine A. Johnson Publications - The name of the magazine is always put in the corner which is their

PROJECT FOR THE FIRST TRIMESTER - . scrapbook for the human body group project. submission: one week before the first