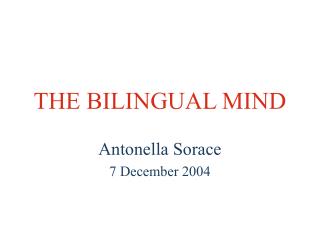 THE BILINGUAL MIND. Antonella Sorace 7 December 2004. Outline. How successful can you be if you start learning a second language as an adult? What are the differences between “early” bilingualism in childhood and “late” bilingualism in adulthood?

The human brain - &quot;one brain, two languages--educating our bilingual students in the light of neuroscience“

Bilingualism and Multilingualism - . by: grace a. licudo. bilingualism. a common human condition that makes it possible

Language and the brain - . detailed review. anatomy of the brain. what is a hemisphere, and what is

Bilingualism and Foreign Language Learning: Some reflections on a neglected topic - . dieter wolff (beijing, may 2007).

Bilingual Parent Advisory Committee BPAC - What is bpac?. in accordance with the state of illinois administrative code