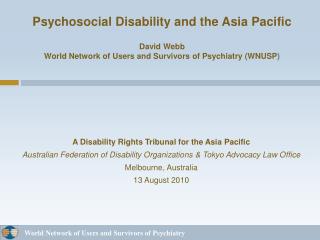 European Network of ex-Users and Survivors of Psychiatry ENUSP - 24-08-2012. european network of (ex) users and survivors

PESTICIDE ACTION NETWORK ASIA AND THE PACIFIC - . workshop on development of legal and institutional infrastructure

Asia and the Pacific - Rural enterprises. and poverty reduction. asia and the pacific. importance of rural non-farm (rnf)

“College of Arts and Science of Asia and the Pacific” - . management information system bs tourism 2013-2014.

Network of Aquaculture Centres in Asia-Pacific - . about naca. intergovernmental organization 18 member governments most

Network of Aquaculture Centres in Asia-Pacific - . about naca. intergovernmental organization 17 member countries most of

Australia, Asia and the Pacific - . introduction to the unit. my objective today is to. introduce the teaching team to