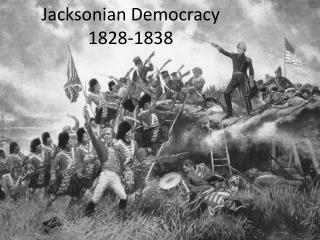 Jacksonian Democracy 1828-1838. Essential Question:. Champion of the “Common Man”?. “King” Andrew?. How did the people and states respond to the “Corrupt Bargain?”. They neglected politics. They increased the right to vote. They supported John Quincy Adams.

The Jacksonian Era - . ap history i. an expanding nation with a significant problem. most americans were pleased by the To the officers, scientists and crew of the US Exploring Expedition 1838-1842 - . i feel a special affinity to the

Why are elections important to democracy? - . a framework for evaluating elections and campaigns. freewrite. why are