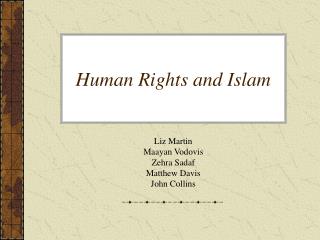 MISCONCEPTIONS ABOUT ISLAM - Iramya bought the first mall in the main city of alwar. this project is a fully commercial

Human Rights in Int’ Law - . lecturer: jiang he. introduction to human rights. the concept of human rights the

International Achievements in Women’s Human Rights - . what they are and why they matter. you can’t make me do that!.

ISLAM FACULTY OF ADMINISTRATIVE OF SCIENCE UNVERSITY OF BRAWIJAYA - . human rights in islam and western : comparative

RIGHTS OF CHILDREN IN ISLAM

Using Human Rights in the Fight against Violence against Women - . introduction. workshop for community advocates and