What Is Islam? - PowerPoint PPT Presentation 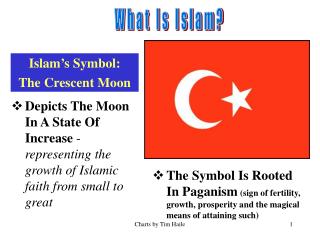 What Is Islam? Islam’s Symbol: The Crescent Moon Depicts The Moon In A State Of Increase - representing the growth of Islamic faith from small to great The Symbol Is Rooted In Paganism (sign of fertility, growth, prosperity and the magical means of attaining such) What Is Islam?

WHAT IS ISLAM? - . “ mankind was one nation having one religion. later, when people invented other religions, allah

WHAT IS ISLAM? - . islam is the right way to live according to the will of allah islam is your birthright every child is

ABC’s of Islam - . kent ratliff. arabic. arabic is the language of islam. islam is meant to be practiced in arabic.

Islam - . surrendering to the will of god. quiz #1 islam. 1. the arabic word ‘islam’ derives from the same root as

What is Islam? A Comprehensive System of Thought and Life a new Civilization - . disclaimer. facts not opinions official

The Teachings of Islam - . chapter 9. a little background. islam began in the arabian peninsula and quickly spread

What is Islam and how is it related to Judaism and Christianity? - . islam = “peace,” “submission” muslim =

What is Islamic Art? - . carl w. ernst introduction to islamic civilization. what is islamic art?. problems of definition