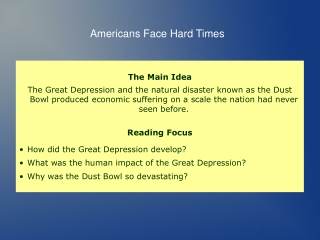 Americans Face Hard Times 21-2 - . the main idea the great depression and the natural disaster known as the dust bowl

Hard Times - . and the battle between fact and humanness: “ you shall never fancy.”. the industrial revolution or

HARD TIMES - . chapter 24 section 2. facing unemployment. “these unemployed are dead men, they are ghosts that walk the

Hard Times - . revision. charles dickens. 1812-1870. serialization. weekly in ‘household words’ to include ‘the

Hard Times - . nativism : the idea that people born in the u.s. are superior to immigrants. the kkk reemerges. emergency

Hard times - . it’s no use crying over spilt milk. youth problems. - finding oneself. -future career. - having no close

Overcome Hard Times - . november 9. we need your advice …. what is your number one survival tip to prepare for a

Overcome Hard Times - . november 9. we need your advice …. what is your number one survival tip to prepare for a

Hard (but not as hard) Times - . russ engel sacred heart university. the interview

Hard Times vs. Utilitarianism - . utilitarianism defined. the belief that an action is right if it tends to produce