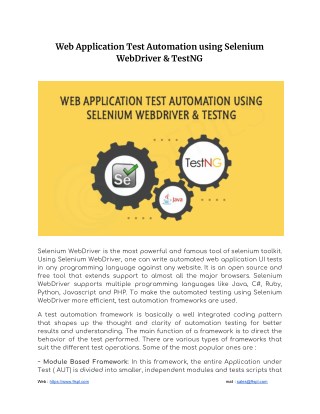 A test automation framework is a well integrated coding pattern that shapes up the thought and clarity of automation testing for better results. Why Selenium Server not required by means of Selenium Webdriver? - The selenium server is the intermediate or between

Test Automation Using Selenium - Get an overview of what is the importance of test automation tools. know more about test

How To Execute Appium Test With TestNG? - Testng is a testing framework which is based on junit and nunit, but it has

Designing Test Automation Framework with Selenium - Do we need to go for test automation? if sure, then which is the