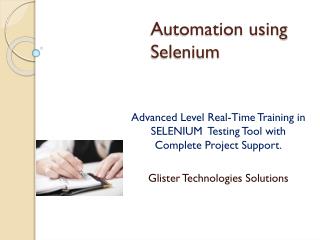 SELENIUM - . what is selenium?. selenium is a free (open source) automated testing suite for web applications across

Library Automation Systems: - . breaking from the past into a new future. marshall breeding director for innovative

How to understand when a project needs automation - Http://qatestlab.com/ purposes of test automation: to improve the

Mobile Test Automation Framework - To someone who is connected with the business of web page testing, the approach to