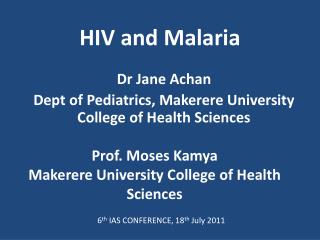 Prevention and Control of Malaria during Pregnancy - . dr.m.davarpanah. facts about malaria. 300 million cases each year

Regional Integration in the Context of HIV and AIDS, TB and Malaria: The case of SADC - . presentation at the xix

Mission Malaria - . linking liverpool and malawi. diagnosing malaria. how do doctors know when a person has malaria? how

Combat Against HIV/Aids, Malaria and other diseases - . mdg goal #6 del rosario, manalastas &amp; lukban. what are