Development of Georgia as a Royal Colony - PowerPoint PPT Presentation 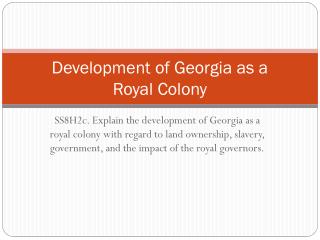 Development of Georgia as a Royal Colony

Development of Georgia as a Royal Colony

From Trustee Colony to Royal Colony - . trustee period: 1732-1752 referred to as trustee georgia because during that time

Royal Governors - . john reynolds. 1st governor of georgia as a royal colony. served as governor from 1754-1756 was a

Royal Colony - . explain the development of georgia as a royal colony with regard to land ownership, slavery, government,

Colonial Georgia - . explain the importance of james oglethorpe , the charter of 1732, reasons for settlement (charity,

The Founding of Georgia - . the creation of a new colony ss8h2: the student will analyze the colonial period of

Unit 3 -- Review Colonization to Royal Government - . exploration. why did hernando de soto explore much of georgia in

Georgia as a Trustee Colony - . why did king george ii allow georgia to become the 13 th colony?. }. charity. reasons for

Colonial Georgia - . oglethorpe , the charter of 1732, reasons for settlement (charity, economics, and defense),

COLONIAL GEORGIA - . chapter 6 – the founding of georgia chapter 7 – life of people in the colonies. unit 3

The Royal Colony of Georgia - . ss8h2 the student will analyze the colonial period of georgia’s history. c. explain the

Development of Georgia - . the pursuit of land. standard: ss8h5 . the student will explain significant factors that

The Founding of Georgia - . the 13 th and colony furthest south. thought question. who should help those who cannot help