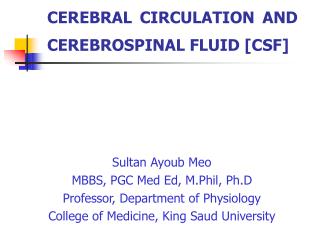 Hydrocephalus - . definition-hydrocephalus is a disorder in which the cerebral ventricular system contains an excessive

Coverings of the Brain (Meninges) - . dura mater- outer brain covering, lines the inside of the skull, tough dense

Cerebrospinal Fluid (CSF) Analysis for total protein - . csf sample. the specimen should be delivered to the laboratory