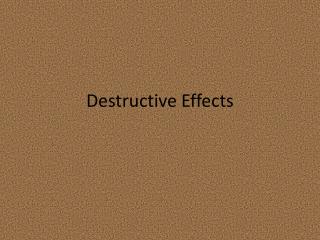 Destructive Effects of Nuclear Weapons - . the generation of a mechanical shock through sudden increase of pressure

Destructive Effects As A Result Of Medical Malpractice - Medical malpractice can have many negative effects on a person.

DESTRUCTIVE FORCES - . destructive forces. weathering and erosion. weathering- the break down of rock erosion- the

Destructive waves - . in the foreground -what are the characteristics of the waves? this type of wave has lots of energy.

Non-Destructive Testing - . what is ndt?. non destructive testing is a term used to inspect a part or component in such a