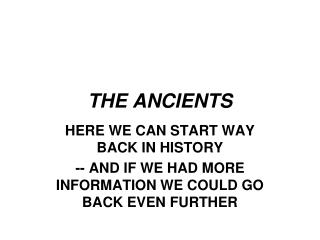 THE ANCIENTS. HERE WE CAN START WAY BACK IN HISTORY -- AND IF WE HAD MORE INFORMATION WE COULD GO BACK EVEN FURTHER. WE START WITH THE CHINESE ---  725 – 645 B.C. THEN GO TO THE GREEKS

The How and Why - Chapter 6 the periodic table. the how and why. history. elements known to ancients: c, cu, au, fe,

The Italian Renaissance - . in italy the growth of wealthy trading cities and new ways of thinking helped lead to a

Atoms, Atoms Everywhere! The History of Atomic Models - . timeline of the models*. ?. *there are many more models. these

HOW DID THE ANCIENTS USE NUMBERS - . introduction. in the following slides you will see examples of different ancient

Diane Avenue Church of Christ - . hebrews 11 (niv ) faith in action 11 now faith is confidence in what we hope for and

HOW DID THE ANCIENTS USE NUMBERS - . introduction. historical

Faith &amp; Repentance - . in hebrews 11:1-3 “now faith is being sure of what we hope for and certain of what we

The Dismal Science as We Know It - . overarching themes in economic thought. value prices  microeconomics

The Dismal Science as We Know It - . overarching themes in economic thought. value prices  microeconomics

Astrology - . a basic understanding of the cycles &amp; rhythms of life &amp; living. the 7 planets of the

Presented by : Mrs. Arundhati Dutta Choudhury Asstt . Professor, Department of English - A historical survey of the