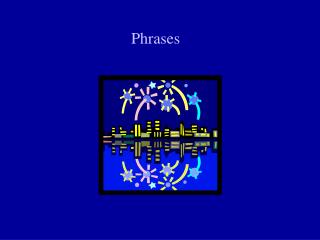 Phrases. This week’s topic…phrases!. Prepositional phrases Verbal phrases Absolute phrases Appositive phrases. What is a phrase? A phrase is a group of related words that lacks either a subject or a predicate or both. amazing triumphs of technology (lacks a predicate)

Phrases - . appositive phrases. phrase. a phrase is a group of words, without a subject and verb, that functions in a

Phrases - . a phrase is a group of related words that is used as a single part of speech and does not contain a verb and

Idioms &amp; Phrases ( egg someone on) - . definition : encourage someone to do something foolish or risky .

Phrases and Clauses - . phrases. phrase : a group of related words that is used as a single part of speech and that does

Sentences, Phrases and Clauses… - . oh my!!!!. sentences. simple or complex, long or short, every sentence is composed

Phrases and Clauses - . knowing the difference between phrases and clauses are a big help when it comes to achieving

Phrases and Clauses - . before you can master sentence structure and use commas correctly, you need to know a bit about

Phrases - . what is a phrase?. phrase= group of words that adds meaning to a sentence but does not contain a subject and

Clauses vs. phrases…what's the difference? - A phrase is a group of words a phrase itself will not have a subject and a