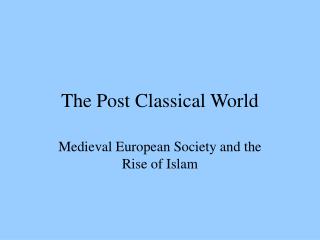 Unit II: 600-1450 - . patterns and effects of interactions among major societies and regions: trade, war, diplomacy, and

Sub-Saharan Africa during the Post-Classical Age - . kingdoms, diffusion, and change. the importance of a desert. not

Post-classical: tang &amp; Song dynasties of china - . like western europe after the decline of the roman empire,

Unit 2 - The Post-Classical World The Mongols : The Terror of Civilization and the Maker of Worlds