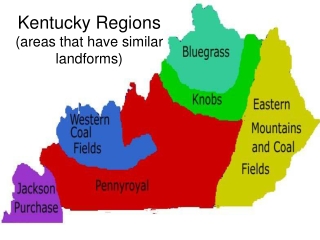 Kentucky Regions (areas that have similar landforms). Bluegrass Region. Geography. In the Bluegrass Region they think the grass is blue. But, it is not actually blue. “Bluegrass” is just a type of a grass that was planted here many years ago. Landform Regions - . physical geography of canada. overview. “regions” is a concept that we use to help organize

LANDFORM REGIONS IN CANADA - . classroom notes and review. 1. what is a region?. an area that has similar

Regions of the USA - . what is a region?. a region is a large area that has common features that set it apart from other

3.4 Volcanic Landforms - . objectives: list the landforms that lava and ash create explain how magma that hardens

3.4 Volcanic Landforms - . objectives: list the landforms that lava and ash create explain how magma that hardens beneath

Physical regions ~ Landforms - . directions: as you view the slides, add definitions and pictures of each region to your

Canadian Landform Regions - . landforms. -&gt; landforms are the topography , or natural features, of the land's

Volcanic Landforms (pages 217–223) - . students will be able to… list the landforms that lava and ash create. explain

7.4 Volcanic landforms - . key concepts: what landforms to lava and ash create? how does magma that hardens beneath the

Pennsylvania Landforms - . mrs. shull. pennsylvania geography. what is geography? that sounds like geology. geography is

Looking at Regions - . what are regions?. places are divided into regions for different reasons. regions can be

Localised Industrial Regions - . the developments in ict have led to similar industries clustering in an area that is

Localised Industrial Regions - . the developments in ict have led to similar industries clustering in an area that is

Regions of North America - . unit 4, lesson 1. vocabulary. region part of the earth’s surface that is alike or