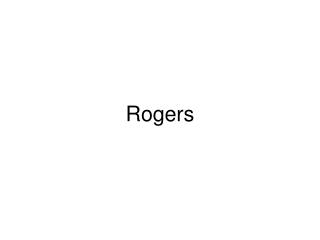 Rogers. Rogers. Part of the “Third Force” in Psychology-human potential Theory of personality change. Rogers doesn’t have a stage model of development. Personality growth can occur through out lifetime of the individual. Individual is always in “act of becoming.” Martha E. Rogers - . 1914-1994. the science of unitary human beings. the concept that human beings are one with their

WILL ROGERS - . biography by: grace turner, luis carrillo, hannah nguyen , mohammad abusalah. why is will rogers one of

Carl Rogers (1902-1987) - . humanistic-existential paradigm self theory. the past has its charms, but nothing new ever

Prep Plus and CRS Plus - . software programs for registering, editing, linking, consolidating, and maintaining central