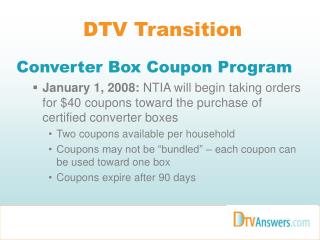 DTV Transition. Converter Box Coupon Program January 1, 2008: NTIA will begin taking orders for $40 coupons toward the purchase of certified converter boxes Two coupons available per household Coupons may not be “bundled” – each coupon can be used toward one box Coupons expire after 90 days.

Introduction to Secondary Transition - . an overview of the variables affecting transition services and planning options

Transition Northfield - . patricia benson board of directors, transition us. sharing information and resources is a

Getting Ready for RDA: Preparing for the Transition - . rick j. block columbia