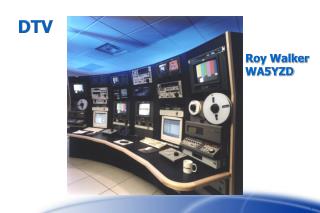 DTV Roy Walker WA5YZD Do You Remember These? History In the United States, the National Television System Committee (for which the NTSC standard is named) standardized on 525 lines at 30 fps in 1940, with regular broadcasts starting on July 1 , 1941 .

TV has evolved - . by law, all high-power tv stations are required to upgrade their broadcast technology by february 17,