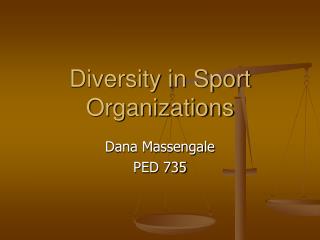 Understanding the Sport Industry - . the management of sport organizations, events and programs in the 21 st century.

Diversity - . by kristin howell. what is diversity?. there are many avenues of diversity. in this presentation we will

Chapter 12 - . objectives. explain why diversity is a business issue explain what happens to tokens in organizations.

DIVERSITY MATURITY QUIZ: What have we learned? How far have we come? - . is diversity a problem? is diversity the sole

Leveraging Diversity Through Inclusiveness - . h. c. davis. what is diversity? how diverse are we? importance of

S P O R T - . sport matters to us all: to individuals, to families , it brings people together for a common aim. we know

3.5- Sport and the Law - . how are sport and the law related? what responsibilities do everyone involved is sport have? .

Chapter 10 Biodiversity - . section 1 what is biodiversity?. objectives. describe the diversity of species types on