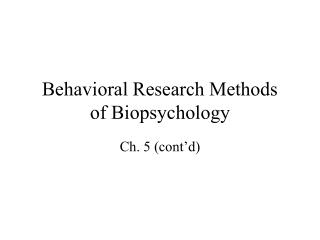 Techniques of Behavioral Modification - . skinner’s emphasis on reinforcement behavior can be shaped by reinforcement

Behavioral Observation - . behavior. “you can observe a lot by just watching.” yogi berra. behavior. what people do

Milestones in Neuroscience Research - . 1700 b.c. the edwin smith surgical papyrus is written by an unknown egyptian

Biopsychology - . localisation of aspects of language . broca’s area. an area of the left of the frontal lobe called