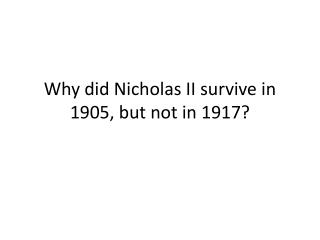 Why did Nicholas II survive in 1905, but not in 1917?. Proposition 1. The armed forces were loyal to Nicholas in 1905, but he had lost their support by 1917. Proposition 1: Evidence. There was consistent loyalty in the army through the earlier years of the war, despite losses and hardships.

“It’s in ISCE but not in insarApp.py ” - . a.k.a learn python programming to use this. other functionalities in

Why Did World War II Start? - . why? (underlying causes of wwii). 1. treaty of versailles. a. germany lost land to

WHY DID RATIONING START IN WORLD WAR II - . by donish bhathena. the start of food rationing. rationing was introduced at

Why did the Bolsheviks succeed in the October/November revolution in 1917? - . by nigina and timmy. the bolsheviks

Tsar Nicholas II – ruler of Russia in 1905 - 1918 onwards: the communists change russia. for example, some russians get

Why was there a Communist revolution in Russia in 1917? - . russian failures in the first world war. the weakness of tsar

1905 was a dress rehearsal for 1917 - . vladimir lenin. today you will…. be able to identify and explain the causes of

Tsar Nicholas II - . by: ashley. who was nicholas?. nicholas ii ( Николай ii ), was the last emperor of russia,