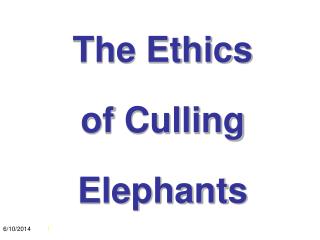 The Ethics of Culling Elephants

The Ethics of Culling Elephants. Should elephants be culled?. Three stories… Ian Whyte Sipho Morake Jason Smith Culling elephants is… an international issue at odds with conservation? . Recent history of elephants in Africa demand for ivory

The Ethics of Culling Elephants

The Ethics of Public History - . by rachel coleman edited by michael wm. doyle. what are ethics?. standards of conduct or

The Elephants Salvador Dali - . assessment 2 by: ekta deshmukh. description. learn from title: this piece by salvador

Elephants in the Room: Confronting Barriers to True Education - . anthony muhammad, phd. call to arms. “when a school

Shark Culling - . do we need it? http://www.youtube.com/watch?v=fm660vin8tg please play this youtube video, once you

Koalas - . by: jawahi r. physical characteristics. koalas are related to kangaroos because they both have pouches for the

Low-Rate TCP-Targeted Denial of Service Attacks (The Shrew vs. the Mice and Elephants) - . aleksandar kuzmanovic edward