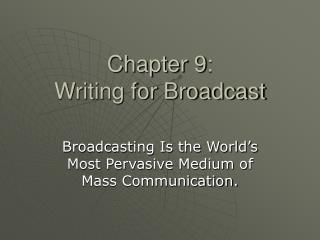 Chapter 9: Writing for Broadcast Broadcasting Is the World’s Most Pervasive Medium of Mass Communication. Selection of News for Broadcast The following are some factors that broadcasters use to select news: Timeliness —the most important news value in broadcast news

Chapter 4 The Medium Access Control Sublayer - . deal with broadcast networks and their protocols. the key issue is how

Broadcast or narrowcast ? WHY DO YOU THINK THIS? - . broadcast. the left side is broadcast because the programs appeal to

Chapter Two The Writing Process - . exploring writing john langan. the writing process: prewriting. get down as many

The Medium Access Control Sublayer - . chapter 4. as we pointed out in chap. 1, networks can be divided into two