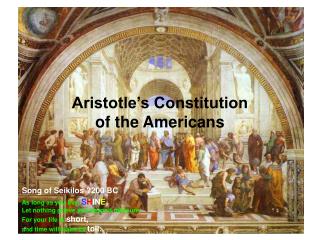 Aristotle’s Constitution of the Americans

Aristotle’s Constitution of the Americans

Unit 1 Historical and Philosophical Foundations of American Government - . essential question. what are the philosophical

The American Dream &amp; - . the artists who dared to be different!. what was happening in america when this famous

Six basic principles of the US Constitution - . 1) popular sovereignty. answers the vexing question of sovereignty –

ORIGINS OF AMERICAN GOVERNMENT - . mike pinson. objectives. describe the nature of democratic government and the

What did the Founders think about constitutional government? - . wthep lesson 1. ms. ramos. what were some

UNIT ONE : Philosophical &amp; Historical Foundations of the American Political System - . what did the founding

We The People - . lesson 1 what did the founders think about constitutional government?. lesson purpose. be able to

Political Philosophy and The American Constitution - . mr. phipps u.s. history. should humans rule themselves?. if so,

Constitution of Athens - . from cleisthenes to the contemporary constitution. post-cleisthenic reforms. archons: