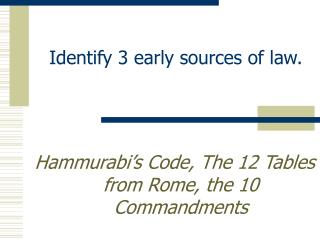 Identify 3 early sources of law. Hammurabi’s Code, The 12 Tables from Rome, the 10 Commandments. Who was the Father of Greek Philosophy? What method did he use to find truth?. Socrates, question and question to find truth. How did Aristotle believe you could find the best government?.

Find it at New Paltz: - Click on this link if there is no full text in your search results!. find it at new paltz:.

3 Lies, 1 Truth - . propaganda war : the battle for truth. lie #1 there is something other than the bible that leads to

Cardiovascular Outcomes Trials in Diabetes: The Truth, the Whole Truth, and Nothing But the Truth - . program goals. the

“New Commandments” - . wednesday 17 th october. “i can’t believe that the only thing wrong with wanton cruelty is

Summary: … (Prompting question: what are the methods used to identify the pH of a substance?) - *** remember to look

Early Influences of Rome - . it’s a mystery!. historians have tried over the years to discover the truth about the

THE 10 UPCAT COMMANDMENTS - . 1.    thou shall have no entrance test in mind other than the

What is Law? - . “……still need the same protection from the conduct of others.” from what type of behaviors do we