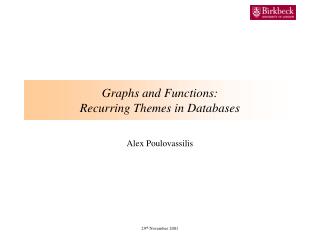 AST101 Recurring Themes in Astronomy - . assumption of uniformity. physical laws and constants do not change with

What Are Recurring Themes? - . feature menu. theme recurring themes your turn. theme. truths about life. think of a movie

Functions and Graphs - . word problems to equations (review). 1. you and three friends go to johnny rockets. you all

Chapter 3: Functions and Graphs 3.2: Graphs of Functions - . essential question: what can you look for in a graph to

Functions and their Graphs - . relations. a relation is a mapping, or pairing, of input values with output values.