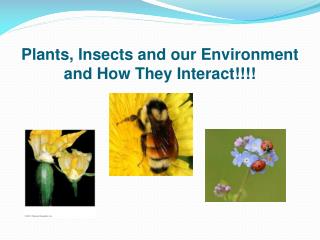 Plants, Insects and our Environment and How They Interact!!!!. Photosynthesis. Photosynthesis: Process by which plants capture Energy from the Sun ; use it to build Carbohydrates INSECT PESTS OF POTATO - . potatoes are attacked by most of the insects which infest closely related solanaceous plants

Ecology - . biosphere energy pyramid ecosystems populations. your habitat. think about every organism that you encounter

Ecology Quiz Review - . empty slide to keep flashcards in order. what is the study of living things and how they interact

AIM : How can we describe the basic characteristics of plants? - Do now : name all the plants you saw today h.w . read