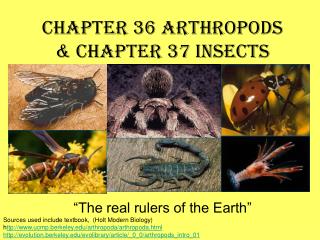 Personal Protective Measures (PPMs) Against Insects and Other Arthropods of Military Importance - U.s. army center for

Insects - . diversity, regulation &amp; locomotion. insect diversity. there are 26 orders and superorders in the

“ The insects will tell you everything, people lie, but insects don't lie.” Murray Marks ---forensic - Iversity of

Arthropods - . the jointed-legged invertebrates. characteristics. makes up 3/4's of all animal species -total number of

Arthropods and Echinoderms - . ms. moore 2/15/13. introduction to the arthropods. phylum: arthropoda what is an

Arthropods - . insects, spiders, crabs, and lobsters are all arthropods, so there are a lot of arthropods on earth. the

Insects Around Us Science Unit 4 Ms. Medina's 5 th Grade Class - . arthropods. insects are known as arthropods why? the

Insects - . chapter 10 section 3. arthropods with three body sections, six legs, one pair of antennae, and usually one or

Unit 8 Invertebrates - . ch. 28 arthropods &amp; echinoderms. what is an arthropod?. arthropods have a segmented