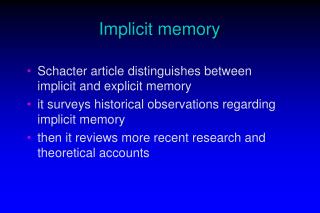 Memory - . kinds of memory. declarative episodic-semantic non-declarative the relationship between conscious and Effects of the Hippopotamus on Explicit and Implicit Memory - . um, we meant hippocampus. it’s a hippocampus party!!.

Implicit memory - . schacter and many other researchers distinguish between implicit and explicit memory this lecture Memory I Long-term memory &amp; Encoding - . are there multiple ltm memory systems?. how do you learn a new skill?