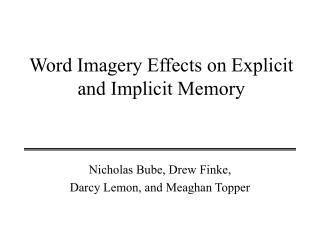 Implicit Bias - . dr. tim killeen. agenda. definition of terms why does this matter? who are we? bias – explicit and

AP TERMS - . language and composition by capt. paynter. the repetition of the same word or phrase at the beginning of a

PSY 369: Psycholinguistics - . language comprehension: the role of memory. memory and comprehension. many sources of

Eight Guideposts to Economic Thinking - . 1.the use of scarce resources to produce a good or service is always costly.