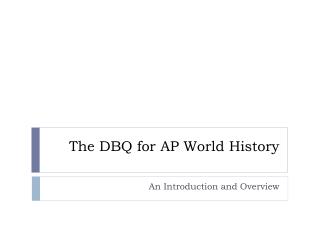 The DBQ for AP World History

The DBQ for AP World History. An Introduction and Overview. What is a DBQ?. DBQ = D ocument B ased Q uestion Primary purpose of DBQ is not to test students’ prior knowledge of subject matter but rather to evaluate their ability to formulate and support an answer from documentary evidence.

The DBQ for AP World History

Point of View on the DBQ - . how to analyze point of view (pov) effectively. when studying historical sources you need to

Document Based Question (DBQ) - . what is a dbq?. a document based question (dbq) is a free response essay question which

AP World History - . writing the dbq essay. thesis. write a thesis statement that outlines what you plan to address in

Writing a Document-Based Question (DBQ) Essay - . “dbq” stands for “document based question”. a type of essay

AP World History - . writing the dbq: thesis statement. document based question (dbq) essay. you will have 40 minutes to

WRITING THE DBQ – TEACHING POINT OF VIEW - . ap world history. the basic core. students must obtain points to get “to

Aim: How Can I Write AP World History Essays? - . do now: using a venn diagram, compare and contrast miley cyrus and