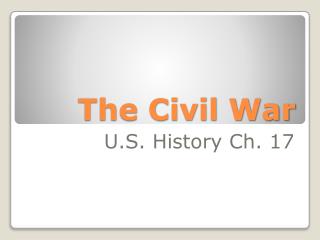 The Civil War. U.S. History Ch. 17. President Lincoln’s goals for peace were forgiving; he wanted to work toward peace and unity. Goals of Civil War. Lincoln was careful about slavery because he wanted the border states to remain with the Union

The Civil War: 1861 - . the first major battle of the civil war was in manassas, virginia. the battle was called the 1 st

The Civil War and Florida - . what caused the civil

Causes of the Civil War - . the issues that tore our nation apart. cause #1. north. south. sectionalism. prior to the

The Immediate Causes of the Civil War - . fundamental vs. immediate. as we discussed in the last unit, fundamental causes

The civil war - . slide show by nyisha v. meyer. when did the civil war take place?. in 1861 a war broke out between the