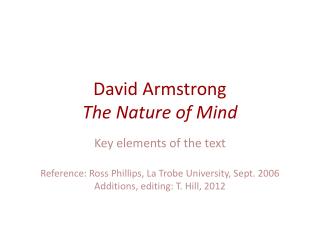 David Armstrong The Nature of Mind

David Armstrong The Nature of Mind

Loss of Identity - . (all quotes are from night by elie wiesel). “the week of passover. the weather was wonderful. my

Night Elie Wiesel - Indifference to evil is evil. night elie wiesel. in 1941, eliezer was a twelve-year-old boy who lived

Unveiling the Construction of Truth: Archives and the Soviet Space Program - Slava gerovitch mit 11 may 2013. unveiling Making Your Trip to the Beach More Fun and More Exciting - When you want to relax, unwind and get rid of all your

Empiricism and the Philosophy of Mind 1 - . dispensing with the given– sense data first. the project. sellars’ aim

King David - . intro to king david. king david is one of the most important figures in jewish history. born in 907 bce,