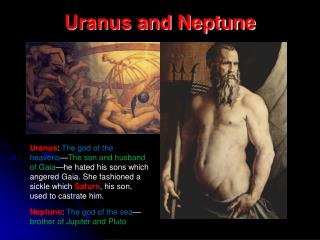 Uranus and Neptune. Uranus : The god of the heavens — The son and husband of Gaia —he hated his sons which angered Gaia. She fashioned a sickle which Saturn , his son, used to castrate him. Neptune : The god of the sea — brother of Jupiter and Pluto. The Solar System. CHAPTER 14

The Outer Worlds - . chapter sixteen. guiding questions. how did uranus and neptune come to be discovered? what gives

Uranus in the Sky - . uranus. as seen by voyager. uranus highlights. accidently discovered in march 1781 by william