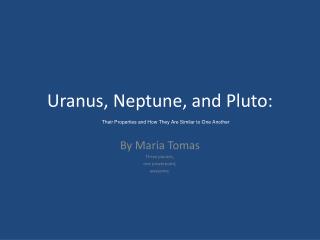 Uranus, Neptune, and Pluto:. Their Properties and How They Are Similar to One Another. By Maria Tomas Three planets, one powerpoint, awesome. Uranus. Seventh planet from the sun and third largest Named after Roman God of the heavens Is as big as approx. 63 Earths Voyager 2 encounters with Uranus and Neptune

Atmospheres of Uranus and Neptune - . both planets have similar makeup to jupiter and saturn uranus: 84% hydrogen, 14%

Uranus, Neptune, and Pluto - . outline. i. uranus a. the discovery of uranus b. the motion of uranus c. the atmosphere

Uranus and Neptune - . astronomy 311 professor lee carkner lecture 19. uranus -- god of the sky. he gives his name to

Discovery of Uranus, Neptune, Pluto - . the last 3 planets were discovered with telescopes , in the last 150 years or so

Uranus - . by eric c. this project will show you what type of planet uranus is, about its orbit, its temperature and the

Uranus - . by: ashley . what it is made of. uranus it has no surface. it has a core of ice and rock. the planet is mostly

Uranus - . by katie jones and keyona fennell. uranus is an outer planet. uranus is the 7 th planet from the sun. . uranus

Uranus - . distance from the sun: 2,871 kilometres . who discovered uranus: uranus was discovered in 1781 by the british

Uranus - . a gas giant . cool facts on uranus . uranus is the 4 th most massive planet in our solar system . while known